Here are some notes from my ongoing experience of setting up a SharePoint 2010 "branch office" farm in Azure using the current preview of persistent Azure virtual machines in a Azure virtual network connected to the on premises Active Directory using an Azure gateway to a Juniper VPN device. 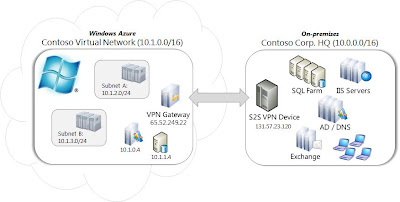 Step by step instructions that I followed:
How to Create a Virtual Network for Cross-Premises Connectivity using the Azure gateway.
How to Install a Replica Active Directory Domain Controller in Windows Azure Virtual Networks.

Creating a virtual network (vnet) is easy and simple using the Azure preview management portal. I recommed creating the local network first, as the vnet wizard otherwise might fail - without giving any useful exception message. We had an issue caused by naming the local network "6sixsix" which didn't work due to the name starting with a digit. Also note that the VPN gateway only supports one LAN subnet in the current preview.

Plan your subnets upfront and make sure that they don't overlap with the on premises subnets. Register both the existing on premises DNS server and the planned vnet DNS server when configuring the vnet. A tip here is that the first VM created in a subnet will get .4 as the last part of the IP address, so if your ADDNSSubnet is 10.3.4.0/24, then the vnet DNS will get 10.3.4.4 as its IP address. Note that you can't change the DNS configuration after adding the first VM to the network, this includes creating the Azure gateway which adds devices to the gateway subnet.

After creating the Azure virtual network, we created and started the Azure gateway for connecting to the on premises LAN using a Site-to-Site VPN tunnel using a secure IPSec connection. Creating the gateway takes some time as some devices or VMs are provisioned in the gateway subnet you specified. We then sent the public IP address of the gateway, plus the shared key and the configuration script for the Juniper VPN device to our network admin. The connection wouldn't come up, and to make a long story short, the VPN configuration needs the 'peerid' to be set to an IP address of a device in the gateway subnet. Our gateway subnet was 10.3.1.0/24 and after trying 10.3.1.4 first (see above tip), the network admin tried 10.3.1.5 and that worked. I'll come back to this below when telling you about our incident when our trial Azure account was deactivated by Microsoft.

With the Azure virtual network up and running and connected to the on premises LAN, I created the AD DNS virtual machine using the preview portal "create from gallery" option. As SP2010 is not supported on WS2012 yet, I decided to use the WS2008R2 server image in this Azure server farm. Note that you should use size "large" for hosting AD as you need to attach two data disks for storing the AD database, log files and system state backup.

I did not use powershell for creating this first VM, instead I manually changed the DNS setting on the network adapter (both IPv4 and IPv6) and then manually joined the to-be AD DNS VM to the existing domain. Note that while you're at it, also set the advanced DNS option "Use this connection's DNS suffix in DNS registration" for both network adapters. Otherwise you will get the "Changing the Primary Domain DNS name of this computer to "" failed" error when trying to join the domain.

Following the how-to for setting up a replica AD in Azure work fine, we only had some minor issues due to the existing AD being on WS2003. For instance, we found no DEFAULTIPSITELINK when creating a new site in AD, so we had to create a new site link first, then create the site and finally modify the site link so that it linked the Azure "CloudSite" and the LAN site. Then the dcpromo wizard step for AD site detection didn't manage to resolve against our WS2003 domain controller, just click "ok" on the error message and manually select the "CloudSite" in the "Select a site" page. 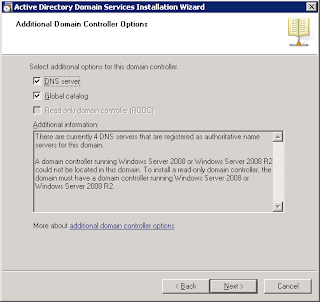 I really wanted to set up a read-only domain controller (RODC) to save some outgoing (egress) traffic and thus save some money, as this branch farm don't need a full fidelity domain controller. However, it is not possible to create a RODC when the existing DC is on WS2003, because RODC is a WS2008 feature. So for "Additional Domain Controller Options" we went with DNS and "Global Catalog" (GC). GC isn't required, but if not installed then all authentication traffic on login need to go all the way to the on premises DC. So to save some traffic (and money), and get faster authN in the branch farm, we added the GC - even if the extra data will drive up Azure storage cost.

The next servers in the farm were added using powershell to ensure that 1) the VM is domain joined on boot, and 2) that the DNS settings for the VM is automatically configured.

The next step was to intall SharePoint 2010 on the farm the next day. Thats when the trial account was deactivated because all the computing hours was spent. Even if you then reactivate the account, all your VM instances are deleted, keeping only the VHD disks. As Microsoft support says, it is easy to recreate the VMs, but they also tell you that the AD virtual machine needs a static IP which you can only get in Azure if you never delete the VM. Remember to recreate the VMs in the correct order so that they get the same IP addresses as before.

What is worse is that they also delete the virtual network and the gateway. Even if it is also easy to recreate these, your gateway will get a new public IP address and a new shared key, so you need to call your network provider again to make them reconfigure the VPN device.

I strongly recommend not using a spending capped trial account for hosting your Azure branch office farm. Microsoft deleted the VMs and the network to stop incurring costs, which was fine with non-persistent Azure VM Roles (PaaS) anyway, but not as nice for a IaaS service with a persistent server farm.

I recommend exporting your VMs using Export-AzureVM so that you don't have to recreate the VMs manually if something should happen. The exported XML will contain all the VM settings, including the attached data disks.

How to deatch Azure VMs to move or save cost: http://michaelwasham.com/2012/06/18/importing-and-exporting-virtual-machine-settings/

When we recreated the Azure virtual network and the gateway, the VPN connection would not come back up again. The issue was that this time the gateway devices had got different IP addresses, so now the "peerid" had to be configured as 10.3.4.4 to make things work.

Now the gateway is back up again, and next week I'll restore the VMs and continue with installing SP2010 on the Azure "branch office" farm. More notes to come if I run into other issues.

Installing the SharePoint 2010 bits went smooth, but running the config wizard did not. First you need to allow incoming TCP traffic on port 1433 on the Azure SQL Server. Then the creation of the SharePoint_Config database failed with:

Could not find stored procedure 'sp_dboption'.

Finally, I tested and verified it all by creating a SP2010 web-application with a team site, creating a self-signed certificate with IIS7 and adding an Azure port mapping for SSL (virtual machine endpoint, TCP 443 to 443), allowing me to login to the team site using my domain account over HTTPS from anywhere.

A note on the VM firewall config is that ping is by default blocked, thus you can't ping other machines in the vnet unless you configure the firewall to allow it. Also note that you can't ping addresses outside of the virtual network and the connected LAN anyway; even if you can browse to www.puzzlepart.com, you can't ping us.
Posted by Kjell-Sverre Jerijærvi at 1:43 PM