A few weeks ago, I posted an illustration of the SOA service + schema versioning ripple effect for incompatible or sematic changes. Stepping out on a limb, I thought I should make a similar illustration for the artifacts in a RESTful service.

The artifacts in such a service is based on the four REST principles:

Even REST needs a versioning and compatibility policy. The only thing that is not subject to change is the uniform interface. All other artifacts are subject to semantic or incompatible changes as the service evolves over time. Changes to the flow of the state machine are changed semantics, while changes to the decisions (allowable next state transitions/hyperlinks) need not be. 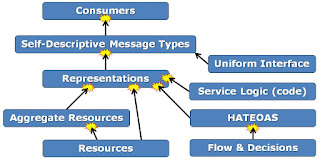 The ripple effect is a bottom-up effect, and an incompatible change on e.g. a customer address resource will cause an explosion of new versions of all affected representation artifacts. In the end, such a change should propagate even to the service consumers. If not, the consumers would operate on representations that have different real-world effects than they are expected to have.

Semantic changes should always be explicitly communicated to the consumers. Incompatible changes should be treated the same way for consistency, i.e. enforce a uniform versioning policy that allows consumers to be standardized.

Having a versioning strategy let you control the effects of the inevitable changes. Using a compatibility policy will help you alleviate some of the negative effects of versioning.
Posted by Kjell-Sverre Jerijærvi at 3:29 PM No comments:

You can switch from classic SOA using service interfaces expressing business capabilities and domain specific messages and data types, to REST exchanging resource representations in standardized formats over the uniform interface with hypermedia expressing the next allowable state transitions of the processes operating on the resources. But how to you put those next state transitions (links) into the representation in the first place? Where is the semantics of the business events interpreted?

The classic SOA domain specific service interfaces and schemas try to express semantics that can be used when composing processes, not just a common format and protocol. Yes, you get more technical loose coupling in your systems with REST, but still have to do the semantic interpretation of the business messages somewhere. The huge advantage of REST is that the semantic decisions or compositions of processes are not part of the consumers, allowing applications like mashup clients to be standardized and (re)use a wide range of shared RESTful services. The only decisions consumers make is which of the transitions to follow next. 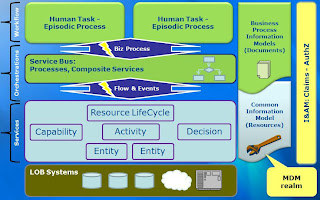 The application state machine using hypermedia as the engine needs to have a mechanism for deducing which are the next allowable state transitions to emit as links into the resource representation. This is where I think that the classical decision services/business rule engine is a good fit even for REST. Granted, it is a bit unusual to calculate a set of possible decisions - allowable state transitions - on beforehand, kind of a dynamic state-driven workflow. But it should be no stranger than adjusting to accepting the uniform interface. In addition, nothing is stopping you from inspecting the incoming resource representation as part of the decision making for controlling the flow of your business processes.

As I’ve said before, to me REST is just another architectural approach to service-orientation, as is EDA. 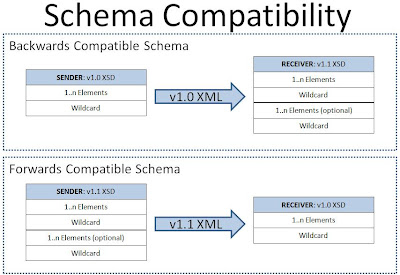 The correct definition of forwards compatible schemas as defined by David Orchard is this: "In schema terms, this is when a schema processor with an older schema can process and validate an instance that is valid against a newer schema". Backwards compatibility means that a new version of a receiver can be rolled out so it does not break existing senders. Forwards compatibility means that an older version of a receiver can consume newer messages and not break.

I define service compatibility this way: 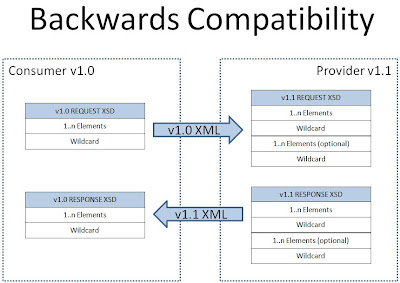 As can be seen from the above figure, service backwards compatibility depends on the provider being able to validate the on-the-wire request XML against a newer schema version and the consumer being able to validate the response XML against an older schema version. The provider must be able to "ignore missing", while the consumer must be able to "ignore unknown". 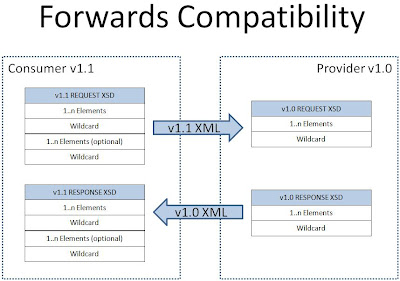 As can be seen from the above figure, service forwards compatibility depends on the provider being able to validate the on-the-wire request XML against an older schema version and the consumer being able to validate the response XML against a newer schema version. The provider must be able to "ignore unknown", while the consumer must be able to "ignore missing".

To add to the complexity of forwards compatibility, there are three types of forward:
In service version routing, the service endpoint accepts multiple versions of the contract (service virtualization) and then applies one of two routing policies:

The implicit version routing policy is what our InfoQ article refers to as forwards compatible service versioning.

An article about "Contract Versioning, Compatibility & Composability" in service-oriented solutions that I've written together with Jean-Jaques Dubray has been published on InfoQ. It covers a lot of themes that I've written about in this blog, and focuses on the need for having a versioned common information model for the enterprise data that comprise the messages used in your business processes.
Posted by Kjell-Sverre Jerijærvi at 7:13 PM No comments: