In the two previous posts, I've shown some jQuery scripts for manipulating the SharePoint user interface by adding the scripts directly as source text in a Content Editor Web Part (CEWP). This is, however, not a good way of adding the scripts to pages considering maintenance and sharing of the provided functionality across multiple pages. Just think of making a correction to the generic scrolling view with frozen header script to improve its performance, after adding it directly in CEWPs on tens or hundreds of view pages.

A better approach is to store the scripts as files that are included in CEWP just like the jQuery library itself. You can use a single document library to store the script files; but as some of your jQuery scripts will be more generic (reusable) than others, I would recommend using several managed document libraries based on script classification. 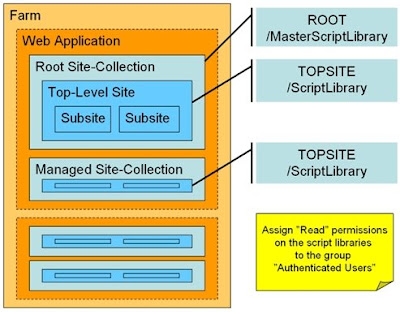 Unique scripts need no script library as they are included directly in CEWPs. Really large companies should consider having a global script library that stores jQuery files used across all SharePoint web applications.

Add the include files in this order in a CEWP: jQuery, styles, common and then shared. Add any unique script after all included styles and script.

Try to avoid using more JavaScript files than strictly necessary, as many include files will impact the load time of the page.

Always use page relative (../path/file.js) or server relative (/path/file.js) URLs in the <script src= > attribute. See this post for how to get site relative URLs. Avoid using absolute URLs at all costs. The web application root site-collection is the "server" in SharePoint terms.

If you don't want to expose and manage the scripts in document libraries, you can always provision the script files to the [12] hive using a feature: SharePoint jQuery deployment feature. See this EndUserSharePoint post for more alternatives for managing include files.